The next day, Secretary of State Rusk tabled a meeting specifically to discuss America’s nuclear concerns. Representing Israel were Foreign Minister Abba Eban, Ambassador Avraham Harma and Ephraim Evron. Rusk insisted that Israel’s continued obstinacy could have a, “disastrous effect on U.S.-Israeli relations” Abba Eban understood the US position but maintained that political issues at home made public declarations and visits to Dimona difficult. It was, of course, public declarations that the US was seeking. “Private assurances were of limited value,” averred Rusk.

Private assurances would have to do. Despite an agreement to sell Israel Skyhawk bombers, Prime Minister Eshkol refused any formal written agreement which, in his words, “might indicate to future historians that he had bargained away Israel's future nuclear policy and opened the Dimona facility to US inspection for the sake of ‘a mere 48 airplanes.’"

Even so, an understanding was arrived at that worked for both sides. The Americans would maintain Israel’s military advantage believing that “if Israel [was] unable to obtain its valid conventional arms requirements, those in Israel who advocate acquisition of nuclear weapons [would] find a much more fertile environment for their views.”

As part of the understanding, a team of U.S. nuclear experts visited Israeli atomic energy sites between March 31 and April 4, 1966; a few months later a memorandum from the Director of the Defense Intelligence Agency to Secretary of Defense McNamara reported “the unanimous conclusion of the three-man team that there is no evidence that Israel is producing or intends to produce nuclear weapons material.”

Over the next year, the Soviets publicly pushed for a nuclear free Middle East and the Americans, at least in principle, agreed to the proposal. But, each time the issue was raised with Israel, the answer was always the same: Israel wasn’t pursuing nuclear weapons. And each time, the Americans seemed to accept the rejoinder. Until February 1967, that is, when American Embassy in Tel Aviv reported to the Secretary of State that “two Israeli contacts [had suggested] Israel could be much closer to nuclear weapons capability than...supposed. The State Department requested an urgent assessment. Israel agreed to another Dimona inspection and once again the “AEC team found no evidence that Israel [was] using Dimona to produce material for use in nuclear weapons.” Of course, they couldn’t rule out the existence of another nuclear facility, or Israel’s potential for building a weapon on short-notice.

On a personal note, I had the opportunity to speak with a retired Dimona engineer in June of this year. I was intrigued when he said he was at Dimona during these inspections. "Was anything deliberately hidden from the inspectors?" I asked. "No," he responded. "Was there perhaps another nuclear facility whose existence was kept from the Americans?" I suggested. "Not that I knew of," he replied.

In May 1967, the State Department reported once more to President Johnson that there was, “no evidence that Israel [was] actually making a bomb,” but they remained convinced that..."Israel intends to keep itself in a position to do so at reasonably short notice should the need arise."

As the Six-Day War  (June 5 - 10, 1967) began, France reneged on arms deals with Israel and declared a weapons boycott, refusing to supply parts for Israel's French-made Mirage jets. Following the war, Israel was anxious to replace the Mirage, especially in light of the USSR's rapid re-arming of Egypt and Syria. Israel was pushed by need directly into the US sphere of influence. 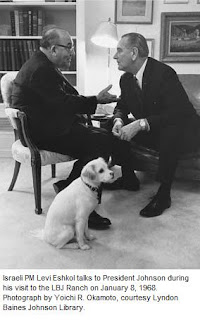 In January 1968, Prime Minister Levi Eshkol met with President Johnson to urgently request military aid, especially the Phantoms. Johnson, who was a longstanding supporter of Zionism, assured Eshkol that the US would stand by Israel. But, as the negotiations for the jets proceeded over the next few months, opposition – namely linkage between the aircraft sale and the nuclear issue – emerged.

But, it was likely the State Department that was doing the pushing and Israel pushed back. Attempts by Paul Warnke, Assistant Secretary of Defense for International Security Affairs, to verify Israel's Dimona promises obligated Israel to request that the White House intervene. Secretary of Defense Clarke Clifford told Warnke to end the talks and not press the matter of verification.

In lieu of a formal agreement, Israel provided the US with a promissory letter, signed by Israel's Ambassador to the US Yitzhak Rabin, that Israel would not introduce nuclear weapons into the conflict. Israel reaffirmed "its long-standing policy as laid down in...1965 that it will not be the first power in the Middle East to introduce nuclear weapons and [agreed] not to use any aircraft supplied by the US and a nuclear weapons carrier. Israel and the US, however, continued to have a very different understanding as to the meaning of the concept of "introduction" of weapons. Israel's position was that as long as no weapons had been tested and publicly announced no "introduction" had been made. The issue was still outstanding as Johnson’s term ended in 1969.

At the start of his administration, Nixon assembled a 'special group' - Deputy Secretary of Defense David Packard, Under Secretary of State Elliott Richardson, CIA Director Richard Helms, Joint Chiefs of Staff Chairman General Earle Wheeler, and Assistant to the President for National Security Affairs Henry Kissinger - to “consider the status of the Israeli nuclear program and [US] responses to it."

"Public knowledge is almost as dangerous as possession itself," wrote Kissinger in the memorandum dated July 9, 1969 from the 'special group' to Nixon. "This is what might spark a Soviet nuclear guarantee for the Arabs, tighten the Soviet hold on the Arabs and increase the danger of our involvement"

Nevertheless, the document confirms that the US still wanted Israel to sign onto the Non-Proliferation Treaty. Israel was also expected to publicly commit not to acquire nuclear weapons, according to Kissinger. It's clear from this document - despite what the Washington Time's Eli Lake asserted - that the US did not yet believe that Israel possessed nuclear weapons. “We should try to keep Israel from going any further with its nuclear weapons program --it may be so close to completion that Israel would be willing." The State Department and Defense agree, however, that for their "own internal purposes [they] could tolerate Israeli activity short of assembly of a completed nuclear device." Disturbingly, Lake, in his article, actually falsified the text to suggest that Israel already possessed nukes at this point. 'Israel would likely have 24 to 30 French surface-to-surfaces missiles, 10 of which would have nuclear warheads,' he wrote, but the actual document read: "ten of which are programmed for nuclear warheads." A big difference.

Still, the Americans had a problem. If they withheld the Phantoms, they would have to publicly disclose - or allow Israel to disclose - why and reveal Israel's nuclear program, which they were very reluctant to do. Nixon was presented with several alternatives including to "not raise the issue." Did Nixon choose this option? A follow-up Memo, dated October 7, 1969, suggests the answer. Nixon had met with Golda Meir and in "private discussions...emphasized that [the] primary concern was the Israelis make no visible (my emphasis) introduction of nuclear weapons or undertake a nuclear test program."

Kissinger asked Ambassador Rabin for a formal response and received assurances that Israel would not become a nuclear power, and would consider the NPT. A few months later, Israel informed the US that they would not sign onto the NPT. But, these assurances seemed to be enough to provide the Americans with a "rationale for standing down," as Kissinger put it. In any event, from this point on, the pressure was off, as least as can be ascertained from declassified documents. The two sides seemed to have agreed on a policy of 'Nuclear ambiguity.'

Yet, the State Department continued to investigate Israel's nuclear ambitions even though some officials had "reservations about whether or not Israel [had] produced and assembled a complete nuclear weapon." Joseph J. Sisko, an assistant secretary of state and JCS Chairman Earle Wheeler continued to fight to prevent Israel from going nuclear. The US “ought to push the NPT urgently" they demanded. And Robert Munn, well into 1970, pressed for another visit to Dimona.

At the same time, the Soviets were shipping tons of weapons, MIG-21 jets and thousands of military advisors into Egypt. Unwilling to allow the USSR to tip the balance of power away from Israel, the US finally agreed on September 1, 1970 to sell Israel the Phantoms.

Within weeks, the favour would be repaid. On September 21, Nixon received an urgent plea from Jordan's King Hussein: Jordan had been invaded by Syria and required "immediate physical intervention, both air and land...to safeguard [the] sovereignty, territorial integrity and independence of Jordan."

Nixon instructed Kissinger to contact Yitzhak Rabin. "Don't ask anybody else. Tell him 'Go.' Israel prepared aircraft and moved troops toward the border with Jordan. The next day, the Syrians backed down and called their tanks and troops home.

Henry Kissinger relayed Nixon's appreciation to the Israelis. "The President will never forget Israel's role in preventing the deterioration in Jordan," wrote Rabin in his memoirs. The leverage had now permanently shifted in Israel's favour; Israel had proven itself willing and capable of defending American interests in the region. Throughout his term, Nixon would remain a steadfast friend, providing emergency airlifts of weapons and supplies during the October War in 1973 (informing staff on October 9 that "the Israelis must not be allowed to lose!") and consistently stonewalling further attempts by the State Department to investigate Israel's nuclear program. On June 16, 1974, Nixon publicly asserted his loyalty to Israel by becoming the first US President to visit the Jewish state.

How subsequent administrations dealt with the nuclear issue will become clear as more documents become declassified in the future.